From July 01 2019, SkyWideSystems is releasing our new product – the SWS Fire 2 parachute harness container.
Testing and finishing the product took almost 2 years. SWS Fire 2 has all the same general characteristics as Fire 1, but there are some important improvements to take into account. See description and the video below:

SWS containers  meet the strictest standards of safety and quality.  Successful test program has allowed the company to create a unique product which has no rival among world-renowned brands. SWS Fire 2 is our highly recommended skydiving harness/container for all experience levels.

The SWS Fire 2 harness systems are considered to be among the most comfortable, strong and durable in the world. And with the best price-quality value.

The reserve free-bag and reserve container have “semi-exposed” reserve pilot chute concept. This kind of structure has been recognized as the most efficient in terms of ensuring the fastest reserve deployment and minimizing the rigging mistakes.

We offer a possibility to purchase a complete rig ready-to-jump. That will release you from tiresome ordering process from different suppliers. We are delighted to help you to choose an optimized set and assemble the rig in the shortest possible time. 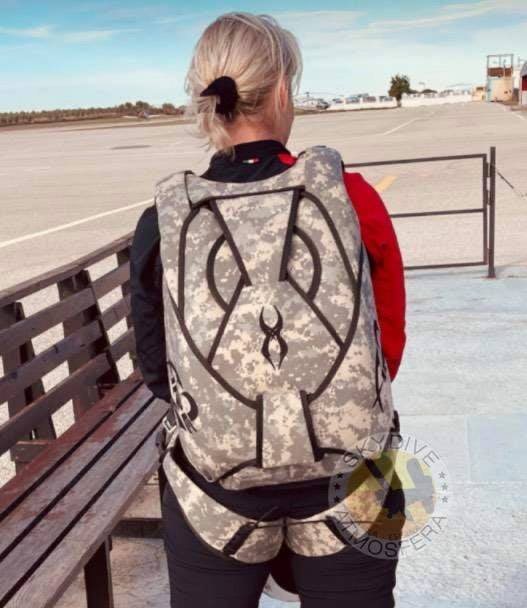 This product price is in USD

IMPORTANT! Dear Customers. We can witness some unpredictable changes in the exchange rate EURO-USD, as well as exchange and duty services costs. The changes makes almost impossible to keep the current price updated on the daily basis on our website. Therefore all products manufactured in Ukraine will be displayed and sales service be handled in US Dollars. We are sorry for all inconveniences caused and keep our fingers crossed that the situation will stabilise as soon as possible so we could go back to prices in EURO. Thank you!

SWS Company is continuously searching to find the best product quality for a reasonable price.

All the containers and canopies in our shop show approximate price. Processing the order is not binding, as we will get in touch with you about the details and offer you the best offer with the final price, with chosen add-ons, embroidery etc.  With all due taxes and shippment. Actually placing order means general inquiry. Don’t hesitate to free your mind and use colouring program and send your inquiry to us without any commitment.

Colouring programme click here and get back to us.

Get in touch with us to get your quote.

How does SWS Fire 2 differ from the previous model

The place, where modern types of parachuting evolved during the 15 years, that have passed since the creation of Fire, has given us new challenges and forced us to completely change the concept ща еру рфктуыы. The initial goal was to create a harness system, that is as flexible and mobile as possible, not constraining any movements. Now, when the rigs are becoming smaller and smaller, the spread of angle dive, speed dive, high speeds and tight suits – the concept has changed. And the accents shifted to the harness, which would firmly fix the rig on the body, preventing it from shifting and shifting the harness, at any speed, and in any position.
To solve this problem, the SWS Fire 2 harness system has been almost completely redesigned. The angle of the Yoke is reduced, and the Yoke cut is reduced. This made it possible to firmly fix the upper part of the harness system on a parachutist. The laterals has additional inserts and is rigidly fixed in the main lift web. This fixes the lower part of the rig in its place.
Testing in on a super-duper hardcore skydivers showed the correctness of our solutions in terms of convenience, and the test drops of a dummy weighing 180 kg confirmed the strength of the harness system.

When creating Fire, much attention was paid to external aesthetics. Smooth surfaces, flatness, etc. This was solved by a multi-layer construction, linings of additional materials, etc. This increased the size and weight of the rig. The weight of Fire rig became the talk of the town, and prevented athletes from achieving high results  Therefore, we changed the design of the main parachute container, simplifying and easing it as much as possible. Due to this we won in volume (Fire 2 in the same sizes of canopies is 1.5 cm less), and weight (Fire 2 weighs 100 grams less).

The design of the central panel

New design has no strips. Due to this, your space for self-expression is not limited – thermal printing, embroidery and other elements can occupy the entire available surface. For student systems, there is a large transparent pocket in which it is convenient to insert a photo of the canopy – which greatly facilitates the work of instructors.

For 15 years and more than 3,000 produced rigs, we have received less then 15 appeals about the riser covers. This is an incredibly excellent result, even by the standards of the global industry.
But. In addition to the reliability of fixation, modern parachuting provides very large requirements for the symmetry of opening of the riser covers. In 2004, only few instructors jumped cross-braced canopies on regular DZ. And packing of them makes packers shock and tremor. In 2019 – you will see them everywere, if not to Leia, then to Valkyrie, or GFX and so on. Asymmetrical opening of riser covers on such canopies guaranteed a linetwist, and often – cutaway after that. Hardcore swoopers, who jumps hop and pop, fundamentally solve this problem – not using riser covers at all. And for all other disciplines – we have developed a magnetic riser covers. Which not only securely fix the riser cover, but always open with exact same force.

Here you have the video, when Iwan explains the difference between the SWS Fire 1 and Fire 2 containers (choose subtitles):

Colouring programme click here and get back to us.

Get in touch with us to get your quote.

Dear customers! Our prices are displayed netto without VAT. If you don't have EU VAT, we will add 21% VAT on the order confirmation. Dismiss

I agree to cookies and let's go! more information